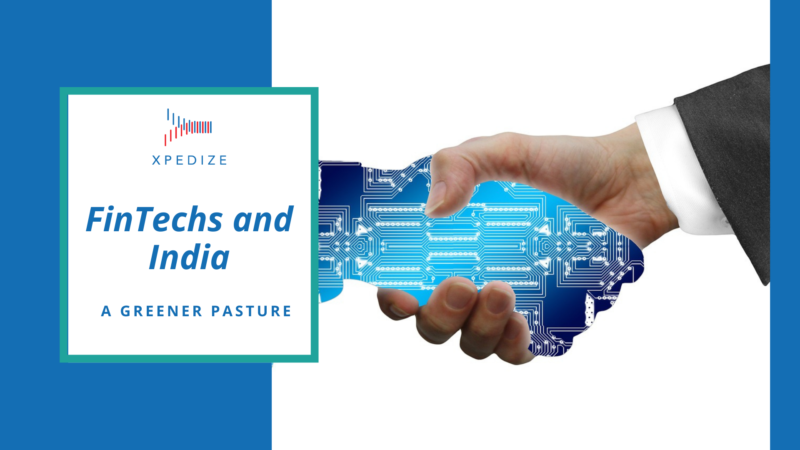 A brief introduction to the FinTech Industry in India: Is it the FinTech destination of the world? A Greener Pasture worth $160 Billion? Let’s find out.

India, over the past few decades, has outperformed several western economies in Compounded Annual Growth and overall Product Innovation to become a leading financial hub. And the lion’s share of the credit goes to the ‘FinTech Revolution’ in India, which has catapulted India to become Asia’s FinTech hub with an adoption rate of 87% against the 64% globally. As per the Reserve Bank of India, the Indian FinTech market is valued at INR 1.9 Trillion ($25.6 Billion) in 2019: something that was quite unimaginable until only a few years ago and can be attributed to a number of factors- the foremost being the amalgamation of technological advancements and finance. And it seems like the world is taking notice: the industry attracted $2.7 Billion in investment in FY 2020, and has already attracted an astounding $2 Billion in the first six months of FY 2021!

As per a joint report by the Boston Consulting Group and FICCI, India’s FinTech Industry is at the precipice of significant value creation, with the Industry’s valuation expected to breach the $160 Billion mark by the end of FY 2025, thereby creating an opportunity for value creation to the tune of $100 Billion.

The question that arises then, is how do we as a nation realize this dream of becoming the Financial Technology Capital of the world? For that, let us first understand the brief history of India’s FinTech Industry.

A quick overview on the Indian FinTech Sector:

While there might not be an exact date, most would agree that FY 2016-17 was the time around when the Indian FinTech Revolution gathered steam. This is supported by the fact that more than two-thirds of the 2100+ FinTechs that exist in the country were incorporated in the past five years, with the industry raising more than $10 Billion in the past 10 years.

The reason for this explosive growth? In three simple words: India’s Digital Transformation, which has led to unprecedented financial inclusion of both urban and rural India. Over the past five years, Government initiatives to push for a cashless economy, such as the Digital India Initiative, Jan Dhan Yojana, Policy of Demonetisation, the Unified Payments Interface (UPI),

apart from the dividends reaped from India’s young population, have led to accelerated adoption of new-age financial technologies to disseminate the same amongst the public at large. The COVID-19 pandemic and the subsequent national and local lockdowns led to further adoption amongst those cohorts that were perhaps supposed to be the ‘laggards’, so as to check the spread of the contagion via transfer and exchange of cash.

But why are FinTechs important in the first place?

FinTechs have allowed better access to capital, opportunities and avenues to MSMEs and other small enterprises/businesses, enabling them to take decisions they otherwise wouldn’t have.

This is perfectly illustrated by the fact that India is relying on the aforementioned as the answer to its MSMEs’ $380 Billion Credit Gap: it is estimated that only 16% of Indian MSMEs receive formal credit!

With Digital Transformation being priority number one for the Government of India, it has invested heavily in skill development, overall digitization, Aadhar rollout, among other things to bring these MSMEs up to speed and enable them to be part of the transformation. Then, we have new, cutting-edge technology being made available at every junction of the user journey of the consumer, apart from the availability of alternate data, allowing FinTechs to cater to this rather obvious need gap. An example of this would be how Startups offering Invoice Discounting Platforms like Xpedize have been able to successfully solve their clients’ liquidity problems by offering Dynamic Discounting Solutions for these buyers and suppliers, creating a win-win situation for all parties involved.

FinTechs subsequently designed, developed and offered products and services that catered to most, if not all members of the Supply Chain- from MSMEs with no access to formal credit to even lower-income, unorganized sector employees working in those MSMEs. With such a large consumer base, Indian FinTechs have a distinct advantage. These new-age companies are making lending intuitive, simple and fast, increasing their efficiency and productivity.

In the B2C segment, the fact that this revolution is backed by the consumers is obvious: FinTechs have transformed traditional banking services like lending, data security, consumer onboarding, Investment banking, among others, while continuously innovating to enlist the services of cutting edge technology like Blockchain, Advanced Analytics and comprehensive algorithms to provide a truly revolutionized User Experience to their customers- something they were not used to.

This is why the Reserve Bank of India believes that FinTechs can serve as the fourth sub-segment of India’s vast financial system, apart from Large, Mid-Sized, Rural and Cooperative Banks, and has the potential to challenge the status quo; to completely transform the financial ecosystem by offering diverse, innovative financial products and services at competitive prices and leveraging technology to deliver better experiences.

We can also see that the purview of Indian FinTechs has expanded vastly over the past few years, including Cryptocurrency, Insurance, Digital Payments, Invoice Discounting, P2P Lending, Stock Trading, Regulatory Technology and even Supervisory Technologies, among others.

As India’s second-largest industry by funding across mergers and acquisitions (M&A), private equity (PE) and venture capital (second only to E-Commerce which, it is predicted, will lose that title soon), the FinTech Industry is by far the most dynamic, rapidly changing and yet resilient. While the last few years have shown promising results for the industry, growth cannot be taken for granted in this ever-changing, unpredictable era.

COVID-19 might have been a blessing in disguise for the industry, but it is no coincidence that India as a market leapfrogged on the FinTech bandwagon: the innovation it presented, the value that it added, and the convenience it introduced the consumers to, was unprecedented. Backed by unique Macro-Economic conditions, Government Policies and Technological Advancements, FinTechs have had a dream run in the country: Digital Payments in India had risen to an astounding 25.5 Billion transactions in 2020, ranking at #1 in the world, outranking China 15.7 Billion transactions. It is predicted that these ‘real-time online digital transactions’ will account for 71.7% of all payments in India by 2025.

Thus, while it remains to be seen how FinTechs revolutionize the Indian Economy, it can be said, without a doubt, that FinTechs have revolutionized the way Indians behave, interact and communicate with each other, financially.

FinTechs and India: A Greener Pasture?

One thought on “FinTechs and India: A Greener Pasture?”